He was a former commander of the Dzavailar Air Force, before the coup. In actuality, he was the mastermind behind the radicals of the People's Federation Government, and one of the leaders of the Federational Revolution. It was noted that many of the old military's soldiers (And Laconia's former allies) followed him out of personal loyalty to him. After destroying the true island fortress, he challenges the Lieutenant to a final showdown, even after a People's Revolution delegate had requested a peace talk. He is battled over the Sea of Karvadoss while he pilots his personal MiG-1.44 MFI, where he is shot down and killed.

His only bits of "dialogue" are a message sent to the Lieutenant; "I will be on the beach of the fortress city." Outside of that, he makes no physical appearance, and is only mentioned in the final level of the game.

Another picture of his MFI.

Zan's MFI, seen in the credits of the game.

One of Zan Daas' emblems, seen on the inside of his MFI's vertical stabilizer. 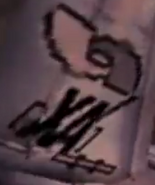 One of Zan Daas' emblems, seen on the outside of his MFI's vertical stabilizer.

Retrieved from "https://airforce-delta.fandom.com/wiki/Zan_Daas?oldid=17783"
Community content is available under CC-BY-SA unless otherwise noted.