The plane itself appears to be a heavily modified X-36. It now has vertical stabilizers, and a much larger profile compared to the X-36. The wingspan is noticeably different as well, and it no longer has front canards. The rear fuselage and bottom profile is smoothly curved and engine placement is reminiscent to that of Ace Combat 3's R-101 Delphinus.

This plane has very impressive stats. Many of its stats are high, with the only exception being Attack. As a result, this plane is a very strong plane, and a good choice if you don't want to use the likes of the MiG-1.44 MFI or the F-22 Raptor.

Stats in the PAL version; note the lower Speed stat. 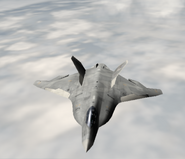 Retrieved from "https://airforce-delta.fandom.com/wiki/YF-26ER_Swan?oldid=18876"
Community content is available under CC-BY-SA unless otherwise noted.