"Its flaws were fixed, and performance enhanced, and it was re-christened the F-25. New operational capabilities brought about by its tailless construction and its ability to communicate by data link with other types of aircraft brought about a revolution in the next generation of strategic aircraft."
―Airforce Delta Storm manual description excerpt, page 27.

"Designed as a highly maneuverable stealth test craft, it has superb handling and stealth capability, but a paltry payload."
―Harry's description of this plane in the shop.

The X-36, known as the F-25C Warbler in Airforce Delta Storm, is an aircraft that has appeared in all three Airforce Delta games. In real life, the X-36 was a small-scale "aircraft" controlled via a virtual cockpit on the ground, built to test the practicality of planes without vertical stabilizers. In the games, however, they are basic fighter jets. In the first game, notably, it was an NPC aircraft used exclusively by the enemy and was unavailable to the player. In Strike, it is usable by Ellen McNichol and is also used by Bravo Squadron in Wind Valley.

The X-36, obviously, has a very interesting design feature; It lacks vertical stabilizers. As previously stated, this was the point of the craft; to be a test bed for the possibility of aircraft without vertical stabilizers. Aside from that, the craft has a very small profile, and front canards. The rear engine is somewhat covered by an "eyelid-like" shaft, most likely there to vector the thrust of the engines.

As previously mentioned, in this game, the X-36 is used exclusively by the enemy, and cannot be used or unlocked. They also seem to have stealth capabilities. They are worth 50,000 thousand credits per-kill (Unless the kill was made with a vulcan, in which case, the money awarded is doubled).

Known as the F-25C Warbler in this game. It is now available for use by the player. It is a decent mid-game plane, having decent stats all around, as well as Stealth and a large range of 4. At the point in which it can be unlocked, it's a fairly decent craft, though once you unlock the likes of the YF-26ER Swan and MiG-1.44 MFI, this plane will start to be outclassed.

It, again, is a decent plane, armed with a decent salvo of missiles and LR-AAMs. However, unlike the last game, it lacks a vulcan (Though in space, that does not matter with the standard boosters). Compared to the F-25C Warbler in Storm, the stats this time around are nerfed, which isn't a very good thing, since the stats in Storm were merely "above average". Internal bomb-bays for missiles also hurts it a lot (though this, again, isn't as important in space missions). However, it IS armed with LR-AAMs, one of the best anti-air special weapons in the game, so... Eh. It's okay. It could be better, it could be worse. It's Ellen's only plane armed with LR-AAMs as well.

X-36 with a generic paint scheme. 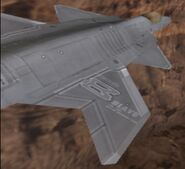 Retrieved from "https://airforce-delta.fandom.com/wiki/X-36?oldid=17740"
Community content is available under CC-BY-SA unless otherwise noted.