Much like the Phosphorous, the Bee Fatty is a strange case of attempting to make a realistic version of the TwinBee. The craft itself is fairly small with a rounded fuselage, with two small variable sweep wings and two smaller rear wings. The craft has a single vertical stabilizer, and two machine guns are visible on the front of the craft. The most noteworthy design detail of the craft is the two large arms present pointed forward on the craft, hands balled into fists; the fists serve as the missiles for this craft. It has a dark blue color scheme.

Now a much more faithful take of the original TwinBee, being a direct adaptation of the craft. The TwinBee has a rounded, blue body with a bright yellow "cockpit" on the front of the craft. It has two huge engines on the back of the craft, as well as arms and legs. The legs of the craft move depending on the action of the player, moving to point forward if the craft applies the brakes. The TwinBee also carries a large gun, which it uses to fire its rockets out of the main barrel and machine gun bullets out of the smaller barrel beneath.

A unique, above-average craft that has an interesting comparison to the Phosphorus, the other Konami-based craft. The Bee Fatty has max mobility and defense like the Phosphorous, but it also has max attack, which leads to it having a mind-boggling 999 missiles. However, despite how awesome this seems, 999 missiles is far, far too much than one could reasonably use for any mission in the game. The Phosphorous also possesses maxed out speed, power, and a huge range unlike the Bee Fatty, and only has an "excellent" missile count of 88. The Phosphorous is the more practical choice overall, though the Bee Fatty is not bad by any stretch of the imagination.

A much more unique showing. Unlike the VIC VIPER, the TwinBee still maintains its maxed out mobility, though defense is slightly worse. However, it only has a guided anti ground special weapon in the Hand Throw bombs. The rockets fired by this craft also come out relatively slowly in comparison to other aircraft that can spam them heavily, which makes using the rockets fairly awkward, especially given the aiming of the rockets considering the positioning of the release point (the gun held by the TwinBee). However, its stats are still insane, which makes it a very above average rocket plane at the very least. And hey, 999 guided bombs are pretty cool, too. 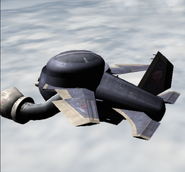 TwinBee in its only color scheme.

Retrieved from "https://airforce-delta.fandom.com/wiki/TwinBee?oldid=18979"
Community content is available under CC-BY-SA unless otherwise noted.