The Ice Floe Base

Satellite Intercept Mission
The Ice Floe Base is the fifteenth mission in the original Airforce Delta. It involves hunting down and destroying a submarine base inside of a vast icy tundra, where your radar and map will not help you locate the targets.

We have a Navy communication requesting assistance.

The Federation Navy has been active in their use of submarines to attack transport ships.

Your mission is to search out and destroy the submarines' base of operation.

Unfortunately, the location of the enemy base is unclear.

Track the course of the icebreakers heading for the base.

This isn't a very tough mission. Finding the base itself isn't that difficult. Head up towards the main icy area, following the river. Track along the edge of the area, staying near the waterways. You should find it pretty soon.

If you need further help finding the base, check the first image in the gallery. There's an image of the map showing the approximate location of the base itself.

Anyways, once you reach the base, there are only five targets. Four subs, and one slightly bigger sub. No big deal. There are a decent number of gun pods and missile pods scattered about, and the subs can obviously fire missiles of their own at you, but it's not too hard.

And if you wanna go after the planes, keep in mind the snow is messing with your radar, making every enemy basically stealth. And keep track of where the base is if you decide to leave to go attack the planes! Nothing worse than losing track of the base while going after a fighter and having to track it down again. 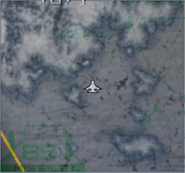 Location of the base proper on the map; It's inside of and around that crevasse the plane is roughly facing.

Image of the mission from the credits.

Retrieved from "https://airforce-delta.fandom.com/wiki/The_Ice_Floe_Base?oldid=18035"
Community content is available under CC-BY-SA unless otherwise noted.