The 1st Captain of Merv Alliance.

"I am Sergei Kinski of the Merv Alliance!"
―Sergei announcing himself as he enters combat.

Sergei was the 1st Captain of Merv Alliance during the events of the game. He was a veteran pilot who was popular with his men.

Not much is known about Sergei's life prior to the events of the game. He became a pilot in the Merv Alliance at an unknown point and Merv surrendered to the O.C.C.. Jamie Jones mentions at one point that he and Sergei once jockeyed for first position as the best pilot but they never settled it since they were in different militaries. At the time of that, they both flew propeller planes but Sergei switched right over to a jet and began to be called the "Emperor" ("Lord" in the Japanese version) of the Merv.

Sergei is known to be calm and patient towards his men, especially the likes of Giuseppe Ferretti and Leon Kleiser, and believes in respecting them despite their shortcomings. He is polite even in battle, though he is not afraid to show off a merciless side (Saying to Holst Prendre in Iceberg as the former says he will not battle him "That's too bad! Pardon me as I shoot you down!"), but regardless, he appears to be one of the more respectable pilots in the O.C.C. He is deadset on raising the status of the Merv people "out of Class H", which seems to be the lowest of the low in the O.C.C.

Sergei is a tall, muscular, brown-skinned man with brown eyes and blonde hair. He wears a black flightsuit like most of the other O.C.C. pilots and is never seen without his helmet and flight gear.

He is first encountered in BLUE WING KNIGHTS, making him the first O.C.C. pilot to be introduced. He defends the Type-B6: Plows in their mission to destroy Lugerde City. He banters with the pilots, with Ruth Valentine surprised he's there and John Rundal dismissing him.

After the battle, he is seen chatting with Albert Ungar in the O.C.C base, noting the pilot in the pale blue jet and how he may be a match for Albert.

He is next encountered in the post-mission cutscene after The "GALE", consolidating Albert over the latter's loss against the pale blue jet. He also reminds Albert after the latter gets inflammatory over Leon Kleiser that "they are all Merv men" and they must focus on raising the status of Merv out of Class H. When Albert notes that Leon and Giuseppe show him no respect, he merely retorts that the bond between soldiers is all they have. He then tells Albert to stop with the "Pale Blue plane nonsense" before telling him to get some rest.

He is directly encountered in Iceberg, protecting the Beloe fleet. However, he fails, and the fleet is heavily damaged. Afterwards, he speaks with Albert again, noting that the fleet was attacked by "a squadron who even had novices in their ranks", noting also that he didn't believe the EDAF's only real threat was the "living legend" Jamie Jones. He also notes that they "fight to protect their beliefs, and to protect the ones they love", saying those are the same reasons any soldier has for fighting (Mirroring what Holst said in the cutscene prior). He then notes that they must hand out their reward to the Merv people, and the two depart.

He is next encountered in Doll Master, in the second wave of squadrons attacking Balga Airbase. He is bemused at Jamie still piloting an old prop plane, before noting that believing in yourself "doesn't matter when you lose" (to which Jamie merely replies it hasn't hapened yet). He is not present in the cutscene after the mission.

Next, he is encountered in the Intercept mission before Night Blitz alongside Giuseppe Ferretti. He despairs at Giuseppe's lowly ambush tactic, even going so far as to apologize to the E.D.A.F. pilots for his actions, and mock Giuseppe when he gets shot down. After Night Blitz, he and Giuseppe are thoroughly talked down to by Navigator. Giuseppe angrily defends himself while Sergei willingly takes the blame for the orbital lift being captured. However, Sergei is found innocent, and Giuseppe is punished instead.

He also appears in the debriefing for Armed Fighting Walker along with Leon Kleiser. Sergei grieves for the loss of Giuseppe despite being displeased with him earlier and says he was a cherished comrade and a respected superior for Leon. He says they must forge on in Giuseppe's name, saying he would want that, and tells Leon he'll be on the job as soon as his plane arrives and he'll temporarily take over the post as Second Squadron Commander and leaves, not knowing that Leon is actually pleased with Giuseppe's death due to his promotion.

He is then encountered in the cutscene after Hyper Speed Rick, meeting Donald Chan, Francine Davout and Jake Emerson, and being polite to each of them as well as discussing the inevitable attack on the Kotor Stronghold. After the three soon depart, Albert notes that this is "the perfect opportunity to raise the status of (their) people", to which Sergei agrees, and the two prepare.

He is lastly encountered in Tiger's Cave, flying to defend the stronghold. After making a proud declaration of his status in the Merv Alliance, he battles the group. If Albert is shot down, he states that Albert "won't be taking (his) place like that!". He battles the group and is eventually shot down. However, he cannot bail out. He notes that "we all die alone, just as we were born", and saying that dying in the sky is not so bad.

The effects of Sergei's death haunt the Merv Alliance afterwards. Leon is (internally) giddy over his and Giuseppe's demises, and Albert is haunted by his failure to protect him. It leads to the latter declining the offer to take over in his place, focusing on getting revenge on "Pale Blue".

"I'll stake my entire reputation on this! I won't let them through! Come and get me, you squirming little brats!"
―Sergei, if the Kotor Stronghold is destroyed while he is still alive.

"Well, we all die alone... just as we were born. But to die in the sky... that's not so bad."
―Sergei's death quote in Tiger's Cave, if he is shot down after Albert.

Sergei's Su-22M-4 "Fitter K" which he uses in the mission BLUE WING KNIGHTS.

Sergei's Su-32FN which he uses in the mission Iceberg and some Stand By missions up to Phase 5.

Sergei's MiG-27K "Flogger J" which he uses in the missions Doll Master, Encount (Night Blitz), and some Stand By missions up to Phase 6.

Sergei's final plane, the Jian-Ji 8 "Finback A", which he uses in the mission Tiger's Cave and some Stand By missions in Phase 6. 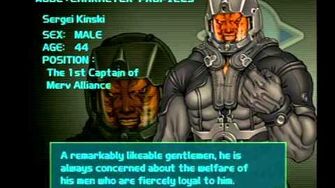 Retrieved from "https://airforce-delta.fandom.com/wiki/Sergei_Kinski?oldid=19458"
Community content is available under CC-BY-SA unless otherwise noted.