"Pretty cheap for one of the most famous Flankers, huh? Of course it's not a knock-off. This special price is just for you."
―Harry's description of this plane in the shop.

As to be expected, the S-55 LFS looks very similar to the Flanker family. However, there are some major differences. Firstly, the plane has a smaller build than the Flankers. And secondly, it only has a single engine, as opposed to two, which most likely owes to its somewhat lower thrust and speed.

This plane is interesting in that it is one of a few PAL/NTSC-J-exclusive aircraft. Stats are fairly average; it has good Mobility and Defense stats, but other stats are average. It has a decent amount of armaments and a fairly high range. It's also unlocked fairly late in the game, at the same time as the YF-26ER Swan. Then again, considering the Swan was nerfed in the PAL and NTSC-J regions, this plane may be slightly more worth it compared to the latter.

The plane is quite similar to its AFD Storm incarnation, though defense has been nerfed a good bit. It also now has a special weapon in the form of the HM-AAM. It has decent mobility and anti-air stats, but other stats are average. It is unlocked the same time as the MiG-1.44 MFI, with the same requirement of completing ten missions as Ken Thomas.

Ditto, this time from Departure/Decision. 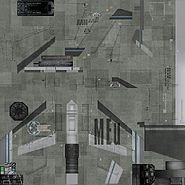