The 6th Section of the 8th Experiment Division's Aviation Unit

"Effort? Practice? Yesterday's news. The chosen ones like me are warriors for a new age! Doll's makeover was another waste of time."
―Pierre during Night Blitz.

Pierre was the 6th Section of the 8th Experiment Division's Aviation Unit. He was artificially enhanced so he could instantly become a skilled pilot.

Very little is known about Pierre's life before the game's events. He is a product of the Prodigy Plan and became "altered". He instantly became an expert pilot and is able to perform aerial moves that no ordinary human being can do. It is unknown if he is a human who was merely taken and modified to become what he was, or if he is, in fact, an artificial human bred and grown into the role he has.

Pierre is shown to be an extremely reckless, psychopathic, and arrogant young man who frequently boasts about his ill-gotten skills. He doesn't seem to care if his actions destroy the Earth as shown in the cutscene after the mission Up Stream where he fires a laser at the Chiron tower after Delta manages to stop it, causing the tower to break into pieces and fall to Earth. Despite his insanity and cockiness, Pierre is shown to be quick and intelligent. Out of all the O.C.C. pilots, he seems to be on the best terms with Navigator, although this changes at the end of the game.

Pierre is a short, 18 year old male of athletic build. Unlike most O.C.C. pilots, who wear a black flightsuit, Pierre wears a red one. He has blonde hair and blue eyes and, like Ellen McNichol, has a small crystal attached to his forehead which is for enhancing his ability as a pilot. After the debriefing for Wind Valley where he asks Navigator to upgrade him, his appearance changes somewhat; his scleras become a strange blue and he has cyan lines along his face.

Pierre first appears in the mission Night Blitz, making him the last O.C.C. pilot to be introduced. He guards the Chiron tower in Armagest City and his interactions with the Delta pilots vary depending on which one is being played as. He is rather undeterred by them as he believes no one could ever defeat him. However, he is eventually shot down and forced to bail out.

In the debriefing, Pierre is summoned by Navigator who is concerned about the Chiron lift. Pierre reassures him that their enemies wouldn't be able to do anything in Armagest even if they captured Chiron. He states that outer space is still their territory and Navigator agrees. Pierre also tells Navigator that local resources should hold them through and the rest is in his hands because he can make them instant ace pilots. Navigator affirms this and tells Pierre he is glad he is safe and a lot of time and effort was devoted to him. Pierre thanks him, saying his abilities allow him to do things that ordinary humans can only dream of doing, and Navigator tells him not to thank him and to just show him results. Pierre agrees and leaves, saying nobody is a match for him when he unleashes his true power.

Pierre appears again in the Intercept mission New Generation before Wind Valley. He accompanies five bombers and is the only fighter pilot guarding them. He smugly tells Delta they can't take him down regardless of how many they've got. He is ultimately shot down, however, and, again, forced to bail.

In the debriefing for Wind Valley, Pierre and Albert Ungar are summoned by Navigator. Pierre introduces himself to Albert and sarcastically says it's nice to meet him. Albert says nothing and Pierre asks if he's 'not the friendly type' or just shy in front of Navigator, assuming Class H citizens don't get to see Navigator much. Albert tells Pierre he just doesn't feel like talking to people who confuse their own abilities with ones that have been handed to them. This enrages Pierre, but Navigator shuts them up. Pierre then tells Albert he just escaped an 'ass-kicking' on that one and Navigator tells them that the O.C.C. values both of them highly and they hope they keep up the good work. After Albert unsuccessfully tries to ask Navigator about Ellen McNichol's past and leaves, Pierre asks Navigator to make him a super soldier, saying he's tired of riding planes fighting like a 'mere human'. Navigator tells him he thinks they can arrange something and they appreciate his enthusiasm. Pierre tells Navigator it's settled then and says, "Think you can come get me? It's pretty hard to get out into space now that they've taken Chiron tower." and Navigator agrees.

Pierre makes another appearance in the debriefing for Turning Point. He meets Francine Davout who is haunted by the loss of her butler Jake Emerson and doesn't want to talk to anyone. Pierre tells her he was going to escort her to her 'new battlefield', space, saying she could use their new equipment and avenge Jake. Francine ultimately accepts Pierre's proposal, though notes to herself that Jake would probably tell her not to trust a suspicious fellow like Pierre if he was still with her.

Pierre appears again in the debriefing for Departure along with Francine whom he tells is one of them now and she thanks him and Navigator for keeping her in the battle. After Francine briefly converses with Navigator, Pierre tells her she ought to get upgraded and more than a mere human like him. Francine rejects his offer, saying she guesses she'll see things through as a "mere" human and leaves. Pierre is annoyed by her attitude, saying he was offering to make her into super girl and she's not even grateful. Navigator states that they are certainly strange and interesting creatures but he finds them difficult to understand.

Pierre's MiG-33 "Fulcrum" which he uses in the missions Night Blitz, New Generation, and some Stand By missions up to Phase 8. 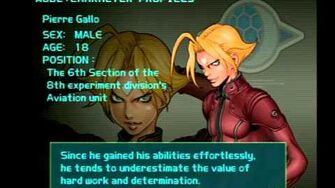 Ref 2 - As noted by Gilgamesh84, this is what his plane is referred to in an official Japanese-only strategy guide for the game.

Retrieved from "https://airforce-delta.fandom.com/wiki/Pierre_Gallo?oldid=19469"
Community content is available under CC-BY-SA unless otherwise noted.