Shoot down all aircraft.

40,000 credits + variable amount depending on what type of weapon was used to take out enemies

"Operation Jackpot" Encount is an Intercept mission for 1st and 3rd Elements in Airforce Delta Strike that plays prior to Night Blitz. Like all other Intercept missions, this mission cannot be replayed in Free Mission mode. Giuseppe Ferretti sets a trap for Delta, along with Sergei Kinski and two backup planes.

On the way to Armagest City, Delta squadron is suddenly hit with an ambush, spearheaded by Giuseppe. Alongside him is a distraught Sergei, and two backup Merv Flying Corps planes. Sergei despairs at Giuseppe's lowly antics, while Giuseppe merely insults and mocks his commander. In the end, all four planes are shot down.

Fairly simple level. Giuseppe and the two Merv planes aren't difficult to take down, but Sergei can be a bit of a nuisance. Still, you've got a numbers advantage. Just keep an eye on your ammo.

The reward for this mission is 40,000 credits plus a variable amount depending on how the enemies were taken out. Progression to Night Blitz is also unlocked. 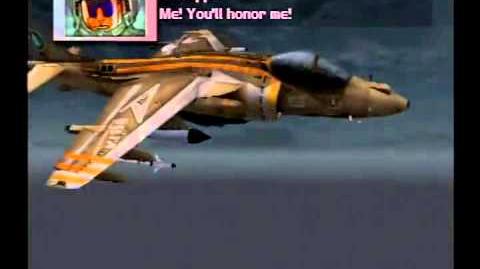 Retrieved from "https://airforce-delta.fandom.com/wiki/Night_Blitz/Encount?oldid=16899"
Community content is available under CC-BY-SA unless otherwise noted.