Purchase from Bellona Airbase after completing Defending the Zayno.
The Dassault Mirage F1 is a French multirole aircraft developed in the 1960s to replace the ever popular Mirage III series of aircraft. The French Air Force took interest in the craft to meet its criteria for an all-weather interceptor craft. After some equipment modification, it would become the main interceptor of the French Air Force. Its lifespan lasted all the way until 2014, wherein it was put to bed at last.

The Mirage F1 is a single-engine craft which bears some slight similarities with the F-16 Fighting Falcon, having a similar wing structure and design. The wings of the F-1 are noticeably more curved and slanted near the rear, however.

Another typical early-game aircraft. The stats on this craft aren't terrible, aside from the horrid range. However, ultimately, it's yet another early game craft that will most likely not see much use due to the bevy of crafts this plane dumps on you. It's also very likely you'll have obtained the F-15S/MT Active at this point, if you know where to find the hidden airbase where it is located. 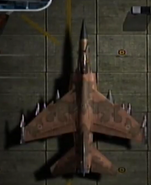 The PAL version of this craft, with a different paint scheme.

Retrieved from "https://airforce-delta.fandom.com/wiki/Mirage_F1?oldid=19105"
Community content is available under CC-BY-SA unless otherwise noted.