"Hmph! Appreciate you coming! I'll keep this short. ...The E.D.A.F. have decided to award you a medal in recognition of your achievements. Here it is. It's yours. It's a bit late coming if you ask me, considering all you've done. Still, well done! Keep it up! You are free to go now."
―Robert's monologue if he is the one who awards the player any medal other than the Shot Down Medal or the Medal From Harry.

"You're here at last! Time's pressing, so I'll get straight to the point. Seems your achievements haven't gone unnoticed. E.D.A.F. top brass have sent a medal. Please accept it. You know, units with medal-holders in them can get supplies for free. I'd say you're pretty lucky. Keep up the good work, okay! And look after Delta's supplies! You are dismissed!"
―Lilia's monologue if she is the one who awards the player any medal other than the Shot Down Medal or the Medal From Harry. 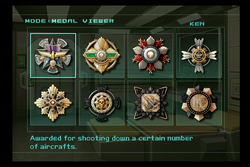 Medals are part of an award system featured in Airforce Delta Strike and are earned by the player upon completing a specific task like purchasing most planes for any one pilot or getting shot down a certain number of times. Medals are earned when the player completes the tasks for them with any character and then plays a mission with that character and listens to the debriefing. After that, the game will show the briefing room and for all medals but one, either Robert Williams or Lilia Mihajlovna will appear and inform the player that the Earth Defense Alliance Force has decided to award the player in recognition of their achievements. There are eight medals that can be earned in the game and earning all of them for any one pilot unlocks the Block Shooter.

The Aircraft Shot Down Medal is a medal earned by the player for shooting down at least 100 fighter planes with any one pilot.

The Ground Targets Destroyed Medal is a medal earned by the player for destroying at least 100 ground targets.

The medal is predominantly gold colored, with a green detail running across the middle of the medal. In the center of the medal, a small E.D.A.F. logo can be seen. It has a four pronged design, and a circular shape as the base.

The Aces Shot Down Medal is a medal earned by the player for shooting down enemy aces like Giuseppe Ferretti or Leon Kleiser at least 50 times.

The medal is a twin-five pronged star-like design, one normal and one inverted. The normal star has a gray-ish wing-like design, while the inverted has a red, spiky design. A double-layered circle sits at the center, and a small E.D.A.F. logo can be seen in this circle.

The Game Completion Medal is a medal earned by the player for completing the game with any character. Ken Thomas and Jamie Jones are the only characters to have unique endings that require specific tasks to be completed to unlock. John Rundal's game completion medal is also required to unlock the secret mission Far Behind.

The medal has a four-pronged, cardinal-oriented design. The prongs are a bright silver. A hollow silver circle runs across the base of the medal, and a smaller golden circle is located at the center. In the middle of the golden circle, a miniature version of the Aircraft Shot Down Medal can be seen, though it lacks the outer silver prongs.

The Takeoffs Medal is a medal earned by the player for taking off at least 30 times.

The medal is a golden eight-pronged star, with a central detail that has eight additional prongs stretching out to each prong of the star. The tips of the central prongs are colored black. An E.D.A.F. logo is present in the center of the medal.

"Finally! I've been waiting for you! There's been a communication from E.D.A.F. top brass. Seems your fooling around recently has earned you a medal. Here it is. Take it. Things like this just take the meaning out of getting medals... I hope you're happy! If you've got any sense, you won't go getting another one! Understand?! Right, get outta here!"
―Robert's monologue if he is the one who awards the player with this medal.

"You've kept me waiting! I want to talk to you. You've been getting up to all sorts recently, haven't you? Well the E.D.A.F. has gone to the effort of sending this medal as commendation. See. ...They reckon there's someone who deserves it. Well top brass don't adopt the same strategy as me. Look at you! Don't you want one of these? Huh? You won't get it for nothing! Now get out of here! Go on!"
―Lilia's monologue if she is the one who awards the player with this medal.

The Shot Down Medal is a medal earned by the player for getting shot down at least 30 times.

The medal has a black four-pronged design oriented cardinally. It has a large circular base, and an additional golden circle running further in. Within the golden circle is an eight-pronged star design, much like the Takeoffs Medal. However, in the center of the star, a golden skull can be seen.

There appears to be a bug in the game that makes The Confront impossible to unlock if this medal is earned, even if Ellen McNichol was unlocked. If this medal was earned before The Confront is unlocked for the first time and Inside is completed with Ken Thomas, the game will show the credits instead.

The Flight Time Medal is a medal earned by the player for playing as any character for at least 5 cumulative hours.

The medal has numerous black prongs surrounding the outside of it, with four diagonal black prongs with golden trim located on the furthest edge. The center of the medal is a notched-square-octagon design, colored gold. Three aircraft are flying diagonally upwards in the medal.

"...You've really helped me out. I wouldn't presume to call you my friend. So let's just say you're an ally, okay? ...So then, ally. As recognition of our new camaraderie, I present you with this. Not bad, huh? Be sure you look after it. Oh! No need to say thank you! Just keep up the good work! Ally!"
―Harry's monologue when he awards the player with this medal.

The Medal From Harry is a medal awarded to the player by Harry Garrett for purchasing at least 80% of all planes for any one pilot.

The medal is a twin-five prong star design, moderately similar to the Aces Shot Down Medal, though with a much different visual design. Both stars have the same visual design; the normal is black, while the inverted is a bronze-copper color. A black circle with a bronze center can be seen in the center of the medal, and within the bronze portion, a picture of Harry can be seen.

Retrieved from "https://airforce-delta.fandom.com/wiki/Medals?oldid=18154"
Community content is available under CC-BY-SA unless otherwise noted.