The 2nd Squadron and 1st Element Leader of Merv Alliance

"I've really got to thank you for getting rid of those fools! You have my deepest gratitude. Thanks to you, I'm a commander! If I could just take you--and that monster--down... Why, my future'd be a sure thing!"
―Leon, near the beginning of either Departure or Decision.

Leon is the leader of the 1st Element of the Merv Alliance's 2nd Squadron. He is Giuseppe Ferretti's right-hand man at the start of the game.

Nothing is known about Leon's life prior to the events of the game. He became a pilot in the Merv Alliance at an unknown point and Merv surrendered to the O.C.C..

Leon is shown to be a scheming, unscrupulous, treacherous, ambitious, selfish, and power-hungry person who expresses joy when others on his own side get outright killed as it means he could be promoted to a higher position. He is also shown to be rather sadistic, such as when he laughs maniacally during an attack on a defenseless hospital ship in the mission Priority. Leon pretends to respect Giuseppe when in reality, he talks badly about him to his underlings behind his back and secretly wants to get rid of him. He also doesn't care about Merv in the slightest; he's more than willing to allow his country to go down in flames to further his own ambitions (As he notes in dialogue for Big Bird).

Leon is a short, brown-skinned, muscular man. He appears to have freckles on his face and has orange eyes. He is often shown wringing his hands. If one looks closely, they will see that he appears to wear a nose ring on his right nostril. He wears a black flight suit like most O.C.C. pilots and is never seen without his helmet and flight gear.

Leon first appears in the debriefing for the mission operation code H4. He shows concern for his squadron commander, noting that he wished he would have gone after Giuseppe mentions the other squadron members "Stepped on his toes". He is then told that he will have to handle the next operation by himself; He is also told to show the world that Merv 2nd Squadron is "way beyond that "Emperor" joker". Leon says that he would risk his life to carry out his orders, to which Giuseppe is pleased to hear before he leaves. As Giuseppe leaves, Leon shows his true colors as he scowls behind his commander's back.

Leon appears in the following mission The "GALE". He notes that he wishes they could take care of this before "Storm" shows up, but is unable to shoot down 3rd Squadron before Albert arrives. If Albert arrives and Leon is still alive, the two will squabble for a bit. If Albert is shot down after he arrives and Leon is still in action, the latter will mock the former. If Leon is shot down, however, Albert will merely note that Leon is "all bark and no bite". If neither are shot down, Leon will eventually be forced to flee due to a lack of fuel.

In the debriefing for the mission, Leon angrily berates Albert for his reckless behavior, before flagrantly waving the fact that he is a higher rank than Albert in the latter's face, to which Albert remains calm and polite regardless. Leon then takes his leave.

He does not appear again until a good deal later, in the optional mission Priority. He cruelly mocks the medical ship, willingly going with the prospect of destroying it. He and Giuseppe are somewhat dismissive of Ellen McNichol at first, though Leon notes she's "one badass lady". If Ellen is shot down, he angrily asks her what she's doing, before grumbling about how she's not worth all the trouble to get her. If Leon is shot down last, he cruelly mocks Ruth, telling her that nothing can save her, even if he's shot down. Regardless of whether or not he is shot down, the medical ship is inevitably destroyed and the mission is over. He doesn't appear in the debriefing for the mission.

He doesn't appear again until Big Bird, where he leads the attack on the Archelon. He draws the ire of 1st Element, with Alex Levine asking if "the O.C.C is full of ignorant jerks like (him)". Eventually, reinforcements (under Giuseppe's orders) arrive, and he questions if his commander "has any faith in him". He also muses and plots to himself about getting Sergei and Albert killed. He fails the mission regardless of whether or not he is shot down.

After the mission, he is angrily scolded by Giuseppe for his failure. Giuseppe notes that he can make up for his failure, to which Leon merely mentally comments that he should keep back as Giuseppe is "worked up", and is likely to get himself killed.

He appears in the debriefing for Armed Fighting Walker, being rather silent as Sergei Kinski mourns the loss of Giuseppe (who was killed in the mission). Leon is temporarily promoted to commander of 2nd squadron. After Sergei leaves, he expresses intense delight at the fact that Giuseppe was killed and he was promoted, also glad that he doesn't need to take off for more missions until his new aircraft (Presumably his MiG-1.44) arrives.

He appears in the debriefing for Tiger's Cave, mentally giddy at how "the old man went and died". Navigator has called him and Albert Ungar to declare the new leader of the Merv Alliance. However, he is taken aback when Navigator chooses Albert to lead. Leon is initially furious, but quickly shuts up when Navigator asks if there are any objections. Surprisingly, Albert objects to being chosen leader, stating he doesn't deserve it since he failed to protect Sergei. Leon quietly accepts the position. Albert notes afterwards that he has left the fate of the Merv people in the hands of a fool.

He last appears in either Departure or the secret mission Decision. He is piloting his new aircraft, the MiG-1.44 MFI. He expresses gratitude towards Delta for "getting rid of those fools". He then notes that if he can take them, and the HLV Starlight, referring to it as "that monster", down, his future would be a sure thing. Regardless, it is possible for him to be shot down. If he is shot down, he panics that his eject device isn't working, crying that he doesn't want to die. He is the last O.C.C ace to die on Earth if this is the case.

"Me, go down? But how? My eject device--it's not working! B-but... I-I don't wanna die!"
―Leon, once he is shot down and killed in either Departure or Decision

Leon's MiG-19PFM "Farmer" which he uses in the mission The "GALE".

Leon's Su-33 "Flanker D" which he uses in the mission Priority and some Stand By missions up to Phase 10.

Leon's MiG-31BM "Foxhound" which he uses in the mission Big Bird and some Stand By missions up to Phase 10.

Leon's MiG-1.44 MFI which he uses in either Departure or Decision. 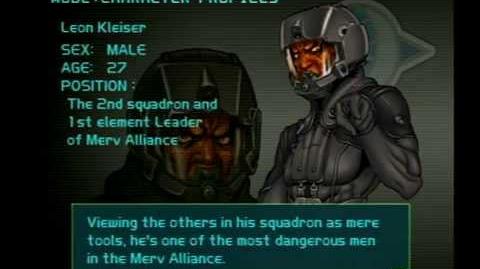 Retrieved from "https://airforce-delta.fandom.com/wiki/Leon_Kleiser?oldid=19462"
Community content is available under CC-BY-SA unless otherwise noted.