"You're a foul creature, you are. For my lady's honor, I'll put you in your place!"
―Jake during Far Behind.

Jake was the 2nd Captain of Ecbatana Air Force and the butler and right-hand man of Francine Davout.

Jake is a member of the Emerson family that has been servants of the Davout family, Francine's family, for generations. Jake became a pilot so he could continue that service when Francine joined the air forces. Francine and Jake went along with the Ecbatana's surrender to the O.C.C. as Francine wanted to continue being a pilot.

Jake is generally portrayed as calm and reserved, but gets angry when he feels that his mistress is in danger. He is extremely loyal to Francine and would risk his life for her. He is sometimes shown to be more down-to-earth and knowledgeable about the military than Francine. He has romantic feelings for her, but he believes that she is above him. However, after his death in R-Mite, the way Francine reacts to it shows that the feelings may have not been unrequited.

Jake is a muscular man of slightly above-average height. His eyes are always closed for an unknown reason. He wears a black flightsuit like most of the other O.C.C. pilots and is never seen without his helmet and flight gear.

Jake first appears, along with Francine, in either the secret missions Lone Wolf or Far Behind. Jake is surprisingly calm and polite towards the likes of John Rundal, willingly allowing him to "entertain" his miss. However, eventually he and Francine bug out when reinforcements arrive. Once reinforcements arrive however, his attitude towards John becomes more sour and hostile, calling John a "foul creature". John brushes him off, simply calling him "Meat". Eventually, the group splits apart, leaving the battle zone.

At the O.C.C base, while Francine is elated at finding a rival as worthy as John, Jake attempts to bring her back down to Earth, saying that she she should "take care of him in the end", to which she agrees. He also notes that she shouldn't toy with him too much, as he doesn't want her father to worry. He'd rather her battle with John wouldn't be "too glorious", and prefers to take him down himself, though Francine merely brushes him off. He does note that he already put in a request for information at her command, though notes they probably won't find out anything about him.

He is later seen in a cutscene after Hyper Speed Rick, alongside Francine, Donald, Sergei, and Albert. His noticeable contrast to Francine's personality is explored here, showing that he is a stickler to the rules while Francine is more easy going about the ordeal. Aside from that, his role in the cutscene is fairly minor.

He is later encountered in the Intercept mission prior to Tiger's Cave. He doesn't have much prominence in this level, however.

His last appearance is in R-Mite, the encounter before Turning Point. In this level, he is eventually shot down and killed, much to Francine's horror. He's fairly quiet during his death, noting that he's still got things to do, but aware that he cannot help her anymore. He says farewell as his aircraft explodes.

His death haunts Francine for the rest of the game, driving her into insanity to get revenge for him.

Jake's MiG-31BM "Foxhound" which is the only plane he pilots. 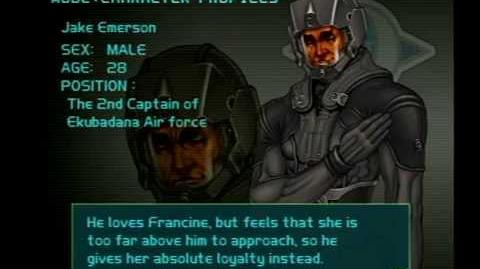 Retrieved from "https://airforce-delta.fandom.com/wiki/Jake_Emerson?oldid=17770"
Community content is available under CC-BY-SA unless otherwise noted.