"A handy support fighter capable of both aerial combat and ground attacks. Unfortunately, it excels at neither."
―Harry's description of this plane in the shop.

The SEPECAT Jaguar is a British/French attack aircraft, originally used by both air forces for a close air support and nuclear strike role. A carrier based version was planned, but it was replaced by the Super Étendard. The GR1 model was a single-seat all-weather tactical strike version with a variety of enhancements. The craft was retired in by its primary users in the mid 2000s, but it is still in service with India. This aircraft only appears in Airforce Delta Strike, where it is usable by Holst Prendre and Pedro Glankert.

The Jaguar is a decently large aircraft with two impressively sized wings. It has a single vertical stabilizer punctuated with two rear wings, with the engines of the craft located beneath the protrusion that contains the wings.

This is basically the Rocket plane for those who don't want either a pathetically slow craft or an aircraft that only has basically 35 shots. Stats are decent all around, it's got good defenses and mobility, afterburners despite being somewhat slow, and missiles to fall back on in case you need them. All around a solid aircraft that puts up solid competition with the F-105D Thunderchief.

Jaguar with a generic color scheme. 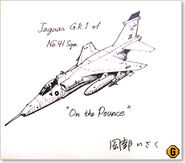 Artwork of the Jaguar.