"This fighter is based on overambitious designs for a lightweight stealth MiG29 fighter. It has problems with balance."
―Harry's description of the plane in the shop.

The I-2000 LFS (lacking the LFS moniker in Airforce Delta Storm) is a plane that has appeared in Airforce Delta Storm and Airforce Delta Strike. It is a concept-plane made for the LFS project. However, the project was cancelled in favor of the PAK FA program (which later resulted in the Su-57). The S-55 LFS was also spawned from this project, which also appears in this game series. This would not be the end for the interesting I-2000, however; the plans influenced the design of a recent aircraft, the Iranian HESA Shafaq. As a result, the I-2000 interestingly lives on through that plane. It is usable by Ellen McNichol in AFD Strike and is also used by MEU in the same game.

This plane has a very... Bizarre appearance, as seen by the images. A somewhat stocky body with very strangely shaped wings (A circular shape that juts out a small rectangle for reach wing). Its vertical stabilizers and engines are very evocative of the F-22 Raptor (Though, it's believed the I-2000 truly only had a single engine, like the S-55 LFS, as judged by the HESA Shafaq).

This plane is a fairly mediocre craft. Despite being unlocked for purchase by completing a secret mission (Surprise Attack), the plane's stats are very mediocre, with the only stand-out being an incredibly high defense.

The stats are somewhat similar to the previous game's stats, though, its defense has been lowered a good deal. It's fairly average all around; Not great, but not horrible. The internal bomb bays it possesses makes it annoying to rapid fire, however. However, it's still pretty decent in the end, if you want to use this.

Note: There are no difference in stats between the US and PAL versions. 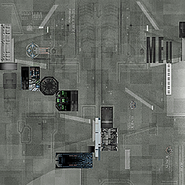 The I-2000 LFS' special weapons, High-Maneuvering Air-to-Air Missiles.
Retrieved from "https://airforce-delta.fandom.com/wiki/I-2000_LFS?oldid=18756"
Community content is available under CC-BY-SA unless otherwise noted.