The 2nd Captain of Merv Alliance

Giuseppe was the 2nd Captain of Merv Alliance and an ace pilot with Leon Kleiser as his right-hand man at the start of the game.

Nothing is known about Giuseppe's life before the game's events. He joined the Merv Alliance at an unknown point, became an ace pilot, and became the 2nd Captain of Merv. They eventually surrendered to the O.C.C..

Giuseppe is portrayed as a cocky, selfish, inconsiderate, and unscrupulous individual who wants to steal Sergei Kinski's popularity and occasionally dreams of killing him off in an accident and taking his place. Giuseppe is sometimes shown to be rather incompetent such as when he comes up with an unsuccessful attempt at ambushing Delta Squadron in the Intercept mission before Night Blitz and Sergei even admits he's not fit to call himself a military man. Giuseppe considers all his men expendable with Leon Kleiser being the only exception. Giuseppe also occasionally believes he is being mistreated by his superiors. It's interesting to note the only person he treats with any modicum of respect (That's sincere, anyways) is Leon; During Big Bird, he was the one to call for reinforcements to back Leon up, seemingly doing so out of genuine concern for him (That even Leon himself notes he appreciates). Though Leon also questions this decision, wondering if Giuseppe has any faith in him; Neither option is really verified. Although he does give Leon a firm scolding when he fails, it seems more like he's doing so as a result of his own massive failure that led to him being punished.

Giuseppe is a muscular man of slightly above-average height. He always wears shades that completely cover his eyes. He wears a black flightsuit like most of the other O.C.C. pilots and is never seen without his helmet and flight gear.

Giuseppe first appears in operation code H4, guarding the oil facility. He dismisses Delta, merely saying they'll be a "feather in (his) cap", but his attitude turns angry when John Rundal snarks at him, calling him a "butt-wipe". The two bicker at each other for a bit. He can be shot down in this level. In the post-mission cutscene, he is seen speaking to Leon Kleiser in their hangar. He notes that his squadmates "Stepped on his toes", and that he could have used Leon's help. He also says that while he is in one piece, but his plane is in several, thus, he cannot participate in the next operation. He then requests Leon to show the world that Merv 2nd Squadron is way beyond that "Emperor" joker. After Leon notes he would give his life to carry out his orders, Giuseppe replies that if he succeeds, he could get promoted, and he will remember Leon if such an event occurs. As Giuseppe leaves, Leon merely scowls at him, hinting at his true feelings for his commander.

He does not appear again until Fleet Attack, guarding the Beloe fleet. He tries to defend the fleet, but inevitably fails. He does not appear in the post-mission cutscene afterwards. If he is left alone for long enough, after a certain amount of time has passed (Three minutes, to be precise), he will flee the battlefield.

Giuseppe also appears in the optional mission Priority for Ruth Valentine. Leon and Ellen McNichol appear alongside him and they attack a stranded hospital ship in the Utorina Sea. The two are somewhat dismissive of Ellen, though Leon notes that she's "one badass lady", and will do anything for the O.C.C. But his opinion of her isn't high regardless. Again, he does not appear in the post-mission cutscene.

Giuseppe makes his next appearance in Night Blitz, in the Intercept prior to the mission. He pulls a trap on Delta squad, all the while showing how little he cares for Sergei. Sergei despairs at his nature, but Giuseppe clearly couldn't care less, even openly talking down to him during the level. However, the ambush fails, and they are all shot down. In the post mission cutscene, Giuseppe angrily defends his actions to Navigator, and is subsequently punished by being forced to pilot an Il-2M3 Shturmovik.

He then appears in the debriefing for Big Bird, angrily scolding Leon for his failure. He then notes that if he succeeds, he can make up for Leon's failure. Leon sees him off, mentally noting that he's stressed, and it's a good time to back off to let him get killed.

His last encounter is in Armed Fighting Walker. As noted, he is piloting the Shturmovik. He asks why he must be treated this way, before angrily blaming Delta, saying he'll drag them to the depths of Hell. If the A.F.W. escapes the battle zone before he is shot down, he angrily asks his squadmates where their fighting spirit is, telling them they can't leave with their tail between their legs, without at least knocking down a Delta first. He is inevitably shot down, and he notes that he can't bail out (Possibly due to the Navigator tampering with the system), and he dies in a humiliating fashion.

Though after his death, Sergei still shows respect for him. Leon takes his place as 2nd Squadron Commander after that.

"Butt-wipe? You called me a butt-wipe?!"
―Giuseppe, in the face of John Rundal's accusations in operation code H4.

"Why? Why must I be treated this way? It's all your fault, Delta! Today will be the day I send you to the depths of hell! All right, everyone--blast the enemy and watch my back!"
―Giuseppe, during the early part of Armed Fighting Walker.

"C'mon, you slowpokes! Where's your fighting spirit? We can't just slink away with our tails between our legs! At least knock down a Delta first! Do it for me!"
―Giuseppe, same mission, if the AFW arrives at its destination without Giuseppe having been shot down

Giuseppe's MiG-17F "Fresco C" which he uses in the missions operation code H4 and Priority.

Giuseppe's Su-25A "Frogfoot" which he uses in the missions Fleet Attack, Encount (Night Blitz), and some Stand By missions up to Phase 6.

Giuseppe's Il-2M3 Shturmovik which Navigator forces him to fly as punishment in Armed Fighting Walker. 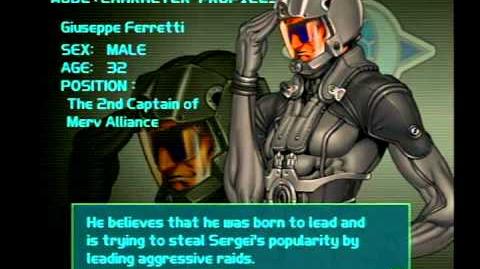 Retrieved from "https://airforce-delta.fandom.com/wiki/Giuseppe_Ferretti?oldid=19470"
Community content is available under CC-BY-SA unless otherwise noted.