"I know you're the best! But the rest are good too."
―Francine during Encount (Tiger's Cave).

Francine was the 1st Captain of Ecbatana Air Force and the O.C.C.'s most senior female pilot.

Francine is a member of the wealthy Davout family, but became interested in aerial combat and joined the air forces along with her butler Jake Emerson. When Ecbatana surrendered to the O.C.C., Francine went along with it because she wanted to continue being a pilot.

At first, Francine has a bright and out-going personality, under-toned with a sadistic streak as mentioned in her profile. Upon meeting John Rundal, she is practically elated to find someone as dangerous as him, and even casually and playfully talks with him during their pitched battles. However, her personality takes a complete 180 after Jake is killed, and she becomes heartbroken. She then becomes vengeful over it, wanting to kill the Delta Squadron as "offerings to him". Once she's killed in Rush Into the Red Star, she accepts death quietly and meekly, as she will be reunited with Jake in death.

Francine is a tall, slim woman with large breasts and hips. She has short blonde hair, gray eyes, and brown skin. She wears small silver ear rings and has a large scar that extends from the left side of her neck to her left cheek. Her eyes are notably slightly smaller than most of the other female pilots. Like most other O.C.C. pilots, she wears a black flightsuit. Her cleavage is partially visible when she is not wearing her helmet and flight gear.

Francine first appears, along with Jake, in either the secret missions Lone Wolf or Far Behind. Francine expresses interest towards John upon noticing him fighting all by himself and is impressed by his skills. Jake tells her it's been a while since he's seen her this happy. Eventually, however, Francine and Jake bug out when Ken Thomas and Ruth Valentine show up. When they appear, Francine expresses interest towards them and their skills as well. She also chats with John who calls her 'interesting prey' since he's never met a jockey who loved combat so much. Francine states it's just a game with a cat and a mouse and he's got to enjoy himself. John asks that's how she sees it and Francine says that's how it is, further intriguing John. Francine also tells Jake she's interested in Delta 3rd Element and he agrees to do recon on them. Eventually, the group splits apart and leaves the battle zone.

In the debriefing, Francine is seen speaking with Jake about John in their meeting room. Francine is delighted over finding a worthy rival like John and Jake tries to get her to come to her senses, saying she should eventually take care of him, to which she agrees. Jake tells her she shouldn't toy with John too much, not wanting her father to worry, and states he'd rather her battle with John wouldn't be "too glorious", and prefers to take him down himself. Francine just brushes him off. Jake does note that he put in a request for information at her command, though notes they probably won't get any information about him.

Francine and Jake appear later in the debriefing for Hyper Speed Rick. She introduces herself and Jake to Donald Chan, Albert Ungar, and Sergei Kinski and interacts politely with each of them. Francine says it's amazing to see the greatest O.C.C. pilots come together all at once like this and it must be to get them motivated to face the enemy's main force and she's glad the O.C.C. still has a flair for style. Donald, being realistic, tells her that they are soldiers that follow their orders, no more, no less, and style plays no part in it. Francine tells him he'll never create a masterpiece battle with that sort of attitude. Jake then says to Francine that she should report and Francine agrees saying that it's good someone among them can be such a stickler for the rules. Jake says with slight irritation that a military ceases to function without procedure. After some talk with Sergei and Albert, Francine and Jake leave.

She is encountered again in the Intercept mission prior to Tiger's Cave. She chats with John again and during the mission, she says to him he's not the only good pilot in his unit and although he's the best, the rest are good too. She and Jake are eventually defeated and Delta proceeds to destroy the Kotor Stronghold.

She makes another appearance in the Intercept mission prior to Turning Point, R-Mite. Here, John tells her he's had enough of her jamming up his mike and he'll see her crash and burn this time. During the mission, Jake is shot down and unable to eject. When his plane explodes, Francine, horrified, screams out his name and says she's sorry upon realizing he's gone. Francine herself is shot down as well and she manages to eject.

In the debriefing for Turning Point, Francine is distressed and angry about Jake's death, saying she never said it was okay for him to go away and leave her. Then Pierre Gallo shows up and Francine tells him to leave her alone. Pierre says he was just going to escort her to her new battlefield and Francine is perplexed. Pierre explains to Francine that now that the E.D.A.F. has got the upper hand on Earth, she might not be able to fight the people who killed Jake much longer. He then advises her to come out to space and use their new equipment to avenge Jake and fight anyone she wants. Francine ultimately accepts Pierre's proposal and Pierre tells her to follow him before leaving. Francine then states that Jake would probably tell her she shouldn't trust a suspicious character like Pierre. Francine then says she'll never forget Jake's loyalty and devotion and wants to repay it somehow despite not knowing if it's what he would have wanted. She then says she bets Jake is watching over her right now from the stars.

Francine appears later in the debriefing for Departure along with Pierre. She is welcomed by Navigator and Pierre says she's one of them now. Francine expresses gratitude to them for keeping her in the battle. Navigator tells her she's welcome to fight all she likes as long as she doesn't become a liability to them. Francine thanks him, saying fighting is what she must do. Pierre then says to Francine she ought to get upgraded and more than a mere human like him. Francine turns it down, saying she guesses she'll see things through as a "mere" human and heads to the meeting room. As she says to herself, "My new battlefield..." Albert appears saying he never thought he'd see her there. After some talk, Albert points out that Francine seems different somehow and always used to be so full of life. Francine states that air battles were once a real thrill for her but are now only a means to a certain end she has planned. Albert sympathizes and wishes her luck. When Francine asks Albert if he's going to join the battle too, he says no and claims to have business to take care of as well. Francine says she hopes everything turns out well for him, too, and leaves.

Francine appears again in either The Defender or The Decisive Battle. She pilots a Type-R2: Vamp in an effort to attack Delta and the E.D.A.F. fleet. John is surprised to encounter her again and Francine vows that all of Delta will be her offerings to Jake.

In the debriefing, Francine asks Pierre if they have to surrender since the L-2 Colony has surrendered. Pierre reassures her that they don't and they're the chosen elite and they'll go to Navigator's base on Mars and launch a counteroffensive from there. Francine is pleased to hear this, saying she's not ready to stop fighting. After some more talk, Pierre says it's time for him to go and give somebody (Albert) a 'little lecture', leaving Francine puzzled.

Francine makes her final appearance in the mission Rush Into the Red Star. She pilots a Type-R2: Vamp again and leads the attack on Isis and its fellow ships as they descend to Mars' surface. Francine, losing her sanity over Jake's death, tells Delta to do whatever they like or maybe not. And says she doesn't think she's going to let them this time for Jake's sake. Francine is ultimately shot down and she says now they can all finish the job thanks to Delta and tells Jake she's coming as her Type-R2: Vamp explodes, killing her. John callously says she came all this way just to become his prey.

Artwork of John and Francine.

Francine's MiG-31BM "Foxhound" which she uses during Earth missions.

A close up view of her emblem.

Francine's Type-R2: Vamp, which she uses in space missions. 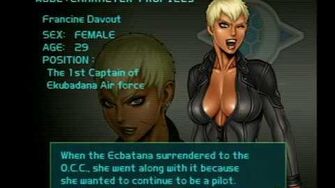 For reference 1, click on 'Characters' and click on the third of the five buttons. Keep scrolling down until you see Francine's profile and click on it.

For reference 2, click on 'World' (the fifth button from the left) then click on 'Mechanics'. Keep scrolling down until you see the Type-R2: Vamp images.

Retrieved from "https://airforce-delta.fandom.com/wiki/Francine_Davout?oldid=17885"
Community content is available under CC-BY-SA unless otherwise noted.