Locking onto a Jian-Ji 8 "Finback A".

20,000 + variable amount depending on number of enemies shot down as well as the type of weapon used

Team Bravo is an Intercept mission prior to Force Scout for Ken Thomas and Ruth Valentine in Airforce Delta Strike. Like all other Intercept missions, this mission cannot be replayed in Free Mission mode.

On the way to the Haben Ravine, Delta and Bravo squadron are intercepted by a large group of Ganos Flight Army Division scouts. The five planes do battle against the nine squadron formation, managing to shoot them all down before proceeding to the Haben Ravine.

One of the more crowded Intercept missions, this mission pits you against nine aircraft. However, you've got four allies with you (three if you're playing as Ken), so it's not too bad. This will just waste some of your ammo, and possibly health (Which is honestly meaningless considering the nature of Force Scout). Just shoot the enemies down at your leisure, or just kick back and let your allies do it.

The reward for the mission is 20,000 credits plus a variable amount depending on how many planes were shot down as well as the type of weapon used to shoot them down. Progression to Force Scout is also unlocked. 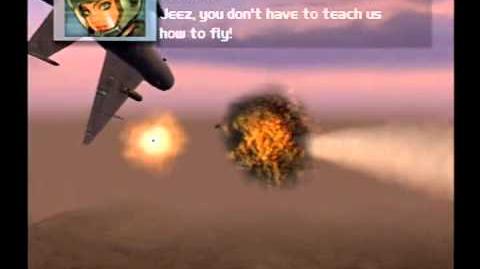 Retrieved from "https://airforce-delta.fandom.com/wiki/Force_Scout/Team_Bravo?oldid=17355"
Community content is available under CC-BY-SA unless otherwise noted.