"This fighter/attack aircraft was designed as a support craft for the carrier-based F-14. This versatile carrier-based aircraft serves as the core aerial combat strength of the US Marines and Navy. The advanced E/F model evolves the plane's capabilities to even further heights."
―Airforce Delta Storm manual description, page 26.

"Although none of the features on this high performance, multi-mission aircraft stand out, it's a good all-around choice."
―Harry's description of this plane in the shop.

The F/A-18C Hornet is a carrier-capable, multirole aircraft developed by McDonnell Douglas. This craft was originally a prototype-modification of the F-5E Tiger II known as the YF-17 Cobra; it competed in the Air Force's Lightweight Fighter competition against the YF-16 and lost. The latter would become the well-renowned F-16 Fighting Falcon. However, that wasn't the end; the aircraft was beefed up for carrier usage, and turned out to be exactly what the Navy and Marines were looking for. It is one of the longest-running American aircraft, but the base Hornet was finally retired in February 1st of 2019. It appears in all three Airforce Delta games, seeing use by Ruth Valentine in Airforce Delta Strike.

The F/A-18C is a very recognizable design; it shares some design elements with the F-5E (Such as the twin-engines and similar front-section), but it has some noticeable differences, mainly the larger wingspan, the two rear wings, and twin, slightly-angled vertical stabilizers on the rear.

Like most craft tied to end-game completion, it just isn't that good. It's literally inferior to the F/A-18E you already possess in all aspects. So... Why the hell should you even bother??

Surprisingly solid stats for a plane, but what kills it is how late in the game its unlocked. It's unlocked near the end of the first chapter of the game; and although its stats aren't bad, it just can't compare to certain planes you most likely have unlocked. Although stats are strong, it suffers from a fairly poor 2 range. Not only that, there are not one, but two enhanced versions of this plane. So this will very quickly see a replacement. Sad to say, you may as well skip this one, unless you really don't have any better.

A very decent craft for Ruth... That's unlocked very late in the game to be of major use, depending on what you have unlocked by this point. All of its stats are average; not necessarily bad, but if you have the likes of the Su-30MKI unlocked (easy to do since it's unlocked by completing four missions as Ruth), it trumps this thing in basically every department. Sadly, it's outclassed.

Enemy F/A-18C from The Ice Floe Base.

Stats in the PAL version. Note the higher mobility.

F/A-18C Hornet alongside an F-14D Tomcat in flight.

Allied Forces F/A-18C from Fortress on the Sands intro

F/A-18C with a generic color scheme. 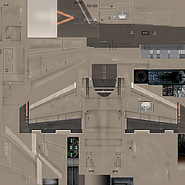 Retrieved from "https://airforce-delta.fandom.com/wiki/F/A-18C_Hornet?oldid=19326"
Community content is available under CC-BY-SA unless otherwise noted.