"If you're an overambitious pilot, this is your plane. Light handling and good acceleration at a fair price."
―Harry's description of this plane in the shop.

The Northrop F-20 Tigershark is an advancement to the F-5E Tiger II, designed for export purposes. It was a privately funded light fighter craft. It replaced the engines with a more powerful single engine that provided many improvements, as well as giving it improved avionics and weapons capabilities. It competed fiercely with the F-16 Falcon. However, after several years with no buyers, the 1.2 billion dollar project was cancelled. It appears in all three Airforce Delta games, and is usable by Ruth Valentine in Airforce Delta Strike.

As to be expected, the craft bears more than a resemblance to the F-5E; the same body type and all. However, instead of the twin-engined design of the Tiger, the Tigershark possesses a single, powerful engine.

A decent early-game plane. Stats are good all around, except for defense (Which is amusingly worse than the F-5E's defense). It can serve you... Alright, though the MiG-29 and F-16 you unlock in the next level after you unlock this will... Basically replace it, unfortunately.

It's... Okay? It's alright for when you unlock it. It's strictly a fighter, so don't try and go for ground targets thanks to this thing's pathetic HP. It does have decent mobility, and a decent special weapon in the HM-AAM. However, once you unlock the Su-30MKI, this thing will become absolutely worthless by comparison, as that plane is basically this, but better in every way. It's a multirole with great defense, better mobility and thrust, and better... Everything.

Enemy F-20 from The Mountain Base. 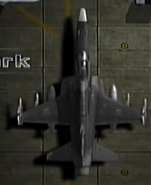 The PAL version of the plane, with a different paint scheme.

F-20 with a generic color scheme.

Retrieved from "https://airforce-delta.fandom.com/wiki/F-20_Tigershark?oldid=19295"
Community content is available under CC-BY-SA unless otherwise noted.