"This superb light fighter can handle both air and ground combat thanks to its larger payload. Affordable and practical, hmm?"
―Harry's description of this plane in the shop.

The General Dynamics F-16 Fighting Falcon (also sometimes nicknamed the Viper due to its design) is an American fighter jet, developed for the US Air Force. It is still currently in active service with the US. There have been 4,500 craft developed as of July of 2016. The Block 50 is an improved version of the standard F-16. It has appeared in all three games, and is usable by John Rundal in Airforce Delta Strike. It is also used by Kite squadron.

An incredibly recognizable aircraft. This is a single-engined plane with a bubble canopy, two fixed wings, and a single vertical stabilizer. It has a large air intake under the cockpit.

A very good early game plane. However, it has a major flaw; it is unlocked at the same time as the MiG-29 Fulcrum. That aircraft has the same stats as this, but superior in all aspects. Not to mention, that aircraft is cheaper than this on top of that! Ouch.

A ridiculously strong early-game performer, unlocked by unlocking Chairon Airbase (By completing Fear in the Forest). Although attack and defense stats are both bad, it has incredible speed and mobility, and strong range for this point in the game. However, once you find the F-15S/MT Active, it'll basically replace this plane thanks to it being superior in basically all aspects.

One of the most averagely-average planes in the entire game. Absolutely nothing about this plane is bad, but nothing about it is exactly good either. It's just... There. If you've got nothing better, it certainly works. Otherwise, stick to the F-15C Eagle and the Su-27SMK "Flanker B". They're both better than this thing in most aspects, and cheaper, too!

F-16 with a generic color scheme. 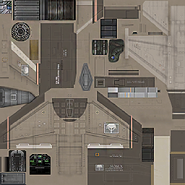 Retrieved from "https://airforce-delta.fandom.com/wiki/F-16C_Block_50_Fighting_Falcon?oldid=19110"
Community content is available under CC-BY-SA unless otherwise noted.