"Slanted towards aerial combat, this highly maneuverable test plan[sic] is just an F-15 with thrust vectoring and canard wings."
―Harry's description of this plane in the shop.

The F-15STOL/MTD (Short Takeoff and Landing/Maneuver Technology Demonstrator) is a variation of the standard F-15 family. It was developed as a technology demonstrator, and was essentially a two-seating F-15C Eagle. It was on loan to NASA. It was basically the testbed for the F-15E Strike Eagle. It appears in all three Airforce Delta games. The "Active" name in the craft is somewhat erroneous; the F-15 ACTIVE and the F-15S/MTD, though from the same plane, never had both names at the same time. It was also called "F-15S/MT Active" in the first two games, before being correctly called the F-15S/MTD Active in Airforce Delta Strike.

As to be expected, this craft looks very similar to the other F-15s in the series. However, the big difference between it and them are the fact this has front canards, and thrust vectoring engines. Aside from that, differences in appearances are negligible.

This is the definition of a "Disc One Nuke". This plane is unlocked extremely early on, and, though highly expensive, it is possible to have enough money to purchase it if you've been diligent in attacking and destroying enemies. It has above-average stats all around, and this will likely be your go-to plane until you unlock something even better.

Arguably even bigger of a "Disc One Nuke" than the original incarnation, you can unlock this craft INCREDIBLY early by finding the hidden Sobel Air Base. Stats are even better than last time; The only stats that aren't "Very high" are Attack and Defense, and neither are bad by any stretch of the imagination.

The PAL version of this craft even has higher mobility than the US version! Though the difference is incredibly minor.

This craft has finally been dethroned. Unlocked fairly late into the game, this craft is arguably inferior in all aspects to the Su-37 you unlock before it. Compared to the infamous Terminator, the only stats that are superior are Speed (a negligible increase) and Anti Air Attack (which doesn't matter as much). Aside from that, the Terminator trumps it. Higher mobility and defense, and a FAR superior special weapon (The mighty LR-AAM). Sad to say, the F-15S/MTD just isn't worth it.

The F-15S/MTD enemy lacks an emblem.

Stats in the PAL version, note the higher mobility.

F-15S/MTD in a generic color scheme.

David's F-15S/MTD Active which he uses in the mission Over the Cloud. 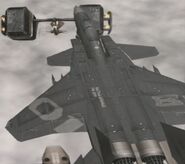 Retrieved from "https://airforce-delta.fandom.com/wiki/F-15S/MTD_Active?oldid=19223"
Community content is available under CC-BY-SA unless otherwise noted.