"You can own the skies with this masterpiece of aerial combat machinery, but for a ground attack, you'll find it lacking."
―Harry's description of this plane in the shop.

The F-15C Eagle is an American fighter jet created in the late 1960s to serve as an all-weather tactical fighter. It entered service in the 1970s, with versions of the craft still being made to this day for various factions, such as the Japanese Air Self-Defense Force. It is one of the most well-known aircraft to be created. The design of the craft was flexible enough to lead to the F-15E Strike Eagle being developed, which is essentially an improved strike variant of the Eagle. It appears in both Airforce Delta Storm and Airforce Delta Strike. In the latter, it is used by Elbow squadron, and can be used by John Rundal.

What do we need to say? When people think "Twin-engined, twin-vertical stabilizer craft", this aircraft's recognizable design is usually pretty high on the list. We need say no more.

A very good early-game plane, unlocked by completing an early-game mission. However, this is the worst of the Eagles you can obtain; and you can obtain the other two Eagles VERY soon. The biggest problem with this plane is the range; 2 range isn't great. And the other Eagles help rectify this issue greatly, so... This plane will serve you for the brief amount of time available until you find the other two Eagles.

It's one of John's stronger performers. Really, this plane has direct competition with the Su-27SMK "Flanker B" - The pros and cons of the planes are apparent. The Su-27SMK has better thrust and a superior special weapon, but worse speed. The F-15C has... better speed. Erm. And you can unlock the Su-27SMK earlier than this since this plane is tied to Phase 7... So the Su-27SMK is arguably the better craft thanks to those factors. But this is still a very strong performer nonetheless!

(Clockwise starting from the top)

Note the inclusion of WSO/copilot mesh

F-15C with a generic color scheme. 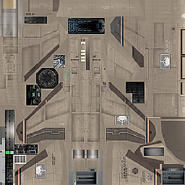 Retrieved from "https://airforce-delta.fandom.com/wiki/F-15C_Eagle?oldid=18715"
Community content is available under CC-BY-SA unless otherwise noted.