The F-14G Hellcat II is a fictional variation of the F-14D Tomcat that appears exclusively in Airforce Delta Storm, located in the hidden Horos Airbase.

The F-14G only has slight design alterations to the F-14D; notably, a slightly larger body, and a somewhat modified front-section. It possess front canards located at where the glove vanes used to be in F-14A variant.

A very noticeable upgrade to the F-14D, the F-14G is superior in all aspects. It can be found somewhat early on in the first chapter of the game. All stats are above average overall, but it has trouble competing with the likes of the F-15S/MT Active. Not only that, but it has a somewhat meh range of 3, which hurts it when dealing with Ace Battles or Bomber Intercepts. Still, by no means a bad plane; use it if you like the F-14D but you want a plane that sucks less.

Stats in the PAL version. Note the higher mobility. 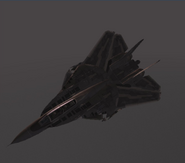 Skull and Crossbones emblem on its tail

Retrieved from "https://airforce-delta.fandom.com/wiki/F-14G_Hellcat_II?oldid=18510"
Community content is available under CC-BY-SA unless otherwise noted.