"After many years of hard work, joint European developers finally succeeded in combining their technologies to give birth to this air superiority fighter. Although small, it is extremely maneuverable and boasts combat capabilities superior to even the F-15."
―Airforce Delta Storm manual description, page 25.

"This one gets two thumbs up. No stealth, but with all the hallmarks of a first rate fighter and your skills you won't need it."
―Harry's description of this plane in the shop.

The Eurofighter Typhoon, also known as the EF2000 (A reference to the date it was supposed to be introduced) and Eurofighter 2000 is a fighter created as part of a consortium in Europe. This aircraft is used by multiple different European countries, most notably England, Germany, Spain and Italy. France was going to be a part of this, but due to complications, they backed out of the program, and instead commissioned Dassault to create the Rafale series of planes. It has appeared in all three games, and is used by Delta 2 in Airforce Delta Storm. It is also usable by John Rundal in Airforce Delta Strike. It is also used by Bravo squadron and the E.D.A.F. Regular Air Force.

It's okay? It's unlocked fairly late in the game, after the twelfth mission. Stats are... Okay. Defense is bad, but the others are okay. The problem is... It's competing with the likes of the F-15S/MT, which is far and away superior to this plane. Sadly, it's... Not exactly worth it compared to that. It's nothing horrible, though.

Once again, merely okay. Stats are above average all around, but it's got problems competing with other planes, such as the Su-30MKI, F-22 Raptor, and, if you found it, the F-15S/MT, again. The fact it's got a pitifully low range in the second half of the game completely neuters what could have been a good plane. Sadly, it's not worth it.

Wow, three times in a row. Again, it's just okay. It's got less competition than it did previously, since it's stuck in John's group of planes, but it's still hard to recommend this over the Su-27SMK "Flanker B" which you may have unlocked by that point, depending on how much you use John. Its stats are very similar, but it also has access to mighty LR-AAMs, instead of the merely okay HM-AAMs. This DOES have higher defense than that plane, but... It's still really hard to recommend. It coming so late in the game also hurts its usefulness a lot. 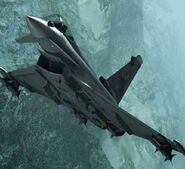 Typhoon with a generic color scheme. 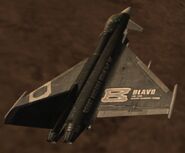 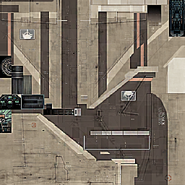 E.D.A.F. Typhoon aboard the Isis hangar, next some Alpha MiG-1.44s.