"...I'm no longer able to make sound judgments...? Maybe I'm unstable? But that couldn't be! I threw all that "sentiment" rubbish away! Being a machine is what's kept me alive all this time! (...) But where can I go? Who can I turn to...?"
―Donald, in the O.C.C. debriefing of operation code T8.

Donald is the 1st Captain of Ganos Flight Army Division. He is known as "The Fighting Machine."

Little is known about Donald's life before the game's events. His character profile mentions that before Ganos surrendered to the O.C.C., he showed great courage in battle, but lost his companions in the process. He began to doubt the value of courage and has since striven to become like a machine, being precise and ruthless. If he is killed in Up Stream, he mentions that he can now follow a girl who was supposedly his romantic interest.

Donald is portrayed as intelligent, cold, ruthless, and calculating. He tries to be emotionless like a machine, believing that emotions are a liability. Sometimes, when he gets shot down, he falls into an angry state as he bails out. He seems to also have a subconscious desire to die, most likely due to the trauma he has suffered in his life. This is most clearly seen when he is shot down in Up Stream - He does not fear death (Unlike the likes of Giuseppe and Leon), nor does he merely accept death (Like Sergei and Albert) - in fact, he seemingly embraces it, finally happy that he can go and join the one he lost. He even notes that he is "Tired of it all" in one of his death quotes. All in all, Donald seems to be a broken man as a result of the wars he has fought, both for the doomed Ganos country, and now under the tyranny of the O.C.C.

Donald is a tall, muscular man with long, white hair that sticks out from beneath his helmet. If one looks closely, they will see that he wears a pair of glasses with dark-tinted lenses and he has a large, red scar on his face that goes over his left eye. His eyes appear to be light-yellow. Like most O.C.C. pilots, he is never seen without his helmet and flight gear.

Donald first appears in the Intercept mission Encount (Twister). He says he knew that Delta has come and orders Dragon 4 to 6 to change course and move to phase B. After John Rundal leaves the battle zone to deal with an enemy squadron, Donald says it's not quite what he predicted and tells his allies never mind and to commence attack. After some fighting, Donald is shot down and he says, "No time to think... Punching out!" and he bails out. If the mission is played with John, Donald also tells Dragon 4 to 6 to change course and move to phase B, but he also tells the remaining Dragon units to move to intercept the enemy. Donald is shot down after some fighting and he says the same thing as before.

Later, Donald appears again in the mission Hyper Speed Rick where he finds Rick Campbell in a high-speed recon plane at the Kotor Stronghold. He tells Rick that coming alone to a place like that is very inefficient, although he says, "But with those injuries, I've got to hand it to you." He is also impressed with Rick's plane and its speed. He even wonders how they got it. After Rick helps Harry Garrett measure all the hangars, he flies away and Donald tells him that might not be a bad idea and asks him if he got the information, saying that's the key to who lives and dies and tells him to tell his allies there's no way they're going down there.

In the debriefing, Donald is seen in the meeting room in the O.C.C. base and he is met by Sergei Kinski and Albert Ungar. They discuss the appearance of a single reconnaissance plane that they failed to shoot down. Sergei reassures Donald that they can make up for it with kills in the air battles but Donald states that if the recon plane escaped then their enemies know the location of the Kotor stronghold and they can anticipate an attack. Albert says they must immediately strengthen their defenses to which Donald agrees. Then Francine Davout and Jake Emerson appear and Donald is intrigued to meet her, telling her he has heard about her accomplishments and she is highly skilled. When Francine says it's amazing to see the greatest O.C.C. pilots come together all at once like this, saying it must be to get them motivated to face the enemy's main force and she's glad the O.C.C. still has a flair for style, Donald realistically states that they are soldiers that follow their orders, no more no less, and style plays no part in it. Francine tells him he'll never create a masterpiece battle with an attitude like that. After some talk between the pilots, Donald tells them he needs to head to the hangar to take care of some maintenance and he's counting on solid teamwork once the mission starts.

After the fall of the Kotor stronghold, he is encountered once again in operation code T8, defending the oil rig. After the mission, he questions how he could have failed, noting that he "threw all that "sentiment" rubbish away", and how being a machine has kept him alive. He then ponders if he is "broken", and where and how he can get "repaired".

He is last encountered in Up Stream, flying alongside Ellen McNichol. He can be shot down and killed in this level. If he is shot down before Ellen, he notes that he couldn't become a machine, questioning whether there was a flaw, or if the whole notion was just a mistake, before saying that he "...can go and join her", before dying. Ellen curses the pilot who shot him down, saying that "He was a good pilot".

If he is shot down after Ellen, his ending speech is a bit different. He questions how he could have miscalculated, before saying that he can "follow her", and that he's "tired of it all" before dying.

It is possible, however, to spare him. If the orbital elevator enters attack altitude, he will order the Troll and Orc unit to "switch to program B", and he will flee the battle zone, surviving. As a result, he is one of three O.C.C. aces who can survive the war, alongside Leon Kleiser and Albert Ungar (if Ellen is not rescued). His fate if he does survive the war is unknown, as he does not appear in the game again.

"Hmm, as I thought. My calculations were correct. I knew you'd be here! In order to avoid future complication, I need you to die!"
―Donald during operation code T8.

"My calculations were wrong?! This isn't what I predicted..."
―Donald, if Ellen is shot down before him in Up Stream.

"This is Machine. Target has passed designated altitude. Commencing transition to program B. Machine to all Troll and Orc units. Make immediate switch to program B."
―Donald, if he is spared during Up Stream.

Donald's Jian-Ji/HonyzhaJi-7 which he uses in the missions Encount (Twister), Hyper Speed Rick, and some Stand By missions up to Phase 6.

Donald's Su-37 which he uses in the mission operation code T8 and some Stand By missions up to Phase 10.

Donald's FC-1 Fighter China which he uses in the mission Up Stream and some Stand By missions up to Phase 10. 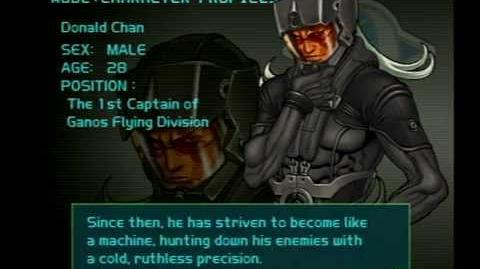 Retrieved from "https://airforce-delta.fandom.com/wiki/Donald_Chan?oldid=19464"
Community content is available under CC-BY-SA unless otherwise noted.