The 1st Squadron and 1st Element Leader of Merv Alliance

"You! In the blue jet! I'm gonna take you out personally!"
―Albert during Tiger's Cave if Sergei is killed by Ken if he is being played as.

Albert is the leader of the 1st Element of the Merv Alliance's 1st Squadron. He is an ace pilot serving under Sergei Kinski at the start of the game.

Much of Albert's life before the game's events is unknown. He joined the Merv Alliance at an unknown point and eventually became an ace pilot. Merv eventually surrendered to the O.C.C..

Albert is portrayed as being someone who is confident in his abilities, yet ultimately somewhat rash in his decision making. He is also spiteful, as he develops a grudge against Ken Thomas for having shot him down in The "GALE" and hurting his pride immensely. Oddly, he was initially fairly honorable when he was first shot down, noting Ken's "nice moves" and how he wouldn't forget him, but this takes a complete 180 in their next encounter. As the game progresses, he throws away more and more of his life, his grudge becoming a primary fixation, even throwing away his country just for the sake of his revenge. He wouldn't even care if the Earth was destroyed, so long as he could get his revenge.

Albert is a tall, muscular man with blonde hair and blue eyes. He wears a black flightsuit like most of the other O.C.C. pilots.

Albert first appears in the debriefing for the game's intro mission BLUE WING KNIGHTS. He greets Sergei in their meeting room when he returns and says that he looks tired. Sergei tells him that he met a pilot in a pale blue jet who was a real pain for them and he could be a match for Albert.

Later, Albert appears in the mission The "GALE" where he is first seen in a cutscene where he shoots down an AWACS plane called 'Skyfish' and three Maverick units. When the cutscene ends, if Leon Kleiser is not shot down at this point, he tells Albert that they don't need the likes of him and Albert says, "The weaker the dog, the louder it barks." and Leon is disgruntled. Albert and Leon either get shot down or run out of fuel and start to head back to base. If Albert runs out of fuel, John Rundal briefly converses with him, asking him if he thinks he can escape and Albert says his name.

In the debriefing, he meets Sergei in their hangar who consolidates him over his loss against the pale blue jet. After Albert gets inflammatory over Leon, Sergei reminds him that "they are all Merv men" and they have to concentrate on raising their status out of Class H. Leon then appears and berates Albert for his poor strategy and tells him he has to work with his men and he'll make the commander worried. Albert apologizes to him and Leon angrily tells him to stop calling him by name, erroneously claiming to be older and (perhaps as well) more highly-ranked than him before leaving. Albert then tells Sergei that Giuseppe and Leon disrespect him but Sergei just states that the bond of trust between soldiers is all they have is the bond between soldiers and tells Albert to stop with the "Pale Blue plane nonsense" before telling him to get some rest and leaving. Albert then states that if Sergei really cared about the Merv he'd recognize the value of their self-respect. He then states that his abilities, the pale blue plane, and the status of the Merv people will all be in question until he defeats them. He then vows that he will shoot him down next time then the world will know his strength.

Albert appears later in the game again in the debriefing for the mission Iceberg. He greets Sergei in their hangar who is exhausted and notes that the Beloe fleet was attacked by "a squadron who even had novices in their ranks", noting also that he didn't believe the E.D.A.F.'s only real threat was the "living legend" Jamie Jones. Albert states that he's heard Jamie gets as much respect as Sergei and then there's that pilot in the pale blue jet. Albert says they should be reaching their breaking point, but continue fighting somehow. Sergei notes that they "fight to protect their beliefs, and to protect the ones they love", saying those are the same reasons any soldier has for fighting (Mirroring what Holst said in the cutscene prior). He then notes that they must hand out their reward to the Merv people, and the two depart.

Albert appears again in the mission Doll Master as part of the third wave of enemies attacking Ballga airbase. He first appears in a cutscene with Ellen McNichol and a MiG-29SMT "Fulcrum C" flying in formation with him. He tells all units to fan out and engage and the MiG-29SMT flies away. Albert then tells Ellen to take the lead and that he'll bring up the rear. They then spot Ken and Albert says, "Gotcha!" Albert recognizes Ken's plane by its blue color and tells him to get ready for a rough landing. Ken tells Albert to spare the threats and Albert yells, "Come on then!" As they pursue Ken, Ellen tells Albert, "Storm, this is Doll!" and Ken is shocked. Albert tells Ellen not to let Ken get away and Ellen agrees. If Sergei is still in the fight when Albert and Ellen appear, Albert will ask him if he is okay. If Sergei is shot down before Albert and Ellen appear, Albert will lament upon having been too late. He then says, "You won't get off that easily with me!" If Sergei remains in the fight, Albert will refer to Ellen as 'just a messed up human' after she says, "The Emperor...?" Albert then says to Ellen, "Our Doll looks like she's in trouble. What's up?" and Ellen says she's seen Ken's plane flying somewhere before. Albert then asks her what is she looking at and she says she doesn't know twice. Albert tells her to stick to orders and Ellen says, "Why?! Why do I... ?" During the fight, Albert yells, "Hey, over here! Why are you after our doll?!" Rick Campbell will be impressed by Albert's speed and Albert says, "Ha! Finally someone who knows how to put on a little speed." Albert then yells at Ken to fight him but Ken refuses and Sergei, if he remains in the fight, tells Albert to forget about him and to keep his eye on the big picture. If Albert is shot down first, he will say, "No! The plane...! Damn! Ejecting!" and Sergei, if he remains in the fight, will say, "Storm! If you're bailing out, we're..." and Ellen will say, "Even Storm's had to..." If Sergei is shot down first after Albert and Ellen appear, Albert will say, "Nobody rubs Hulk's face in the dirt! You'll pay!" If Ellen is shot down first, Albert will say, "You've taken down our commander? Now You'll really pay!" If Albert is not shot down, but a certain number of other enemy planes are, he will say, "Things are looking grim... Better pull out." In the debriefing, Albert and Ellen report to Navigator who tells them to enter and asks Albert how Ellen is now. Albert tells him there are no problems detected and thinks she shows high potential for a young pilot. Navigator understands and asks if they can consider the experiment on her a success and Albert says yes and tells Navigator to check the report for the details. Navigator agrees and tells Albert he is to use Ellen in his squadron. Albert asks to be sure and Navigator explains that they are now positioned on the front line, making the perfect battle grounds for Ellen. Albert gives no response and Navigator says he will consider promoting the status of the Merv people if this goes well. Albert agrees and says he will be going. In the O.C.C. meeting room, Albert asks Ellen why she hasn't said a word and Ellen says it's nothing and she still gets a little nervous with the higher-ups. Albert smiles and says she almost sounds human when she talks like that. Ellen is confused and Albert thinks to himself that the whole Doll Project is enough to make him vomit and wonders who would've expected the day to come that they'd use mind control on prisoners of war and unleash them as robot soldiers. Ellen then says to Albert she would like to ask him to help her to go through some aerial maneuvers if he has a moment. Albert thinks to himself that he knows this is dirty work but it's for the advancement of his people. He then tells Ellen to prepare to take off and Ellen says she'll get going then. After Ellen leaves, Albert points out that it almost seemed like 'Pale Blue' (Ken) knew about Ellen and wonders how could that be.

"So we meet at last... Ken Thomas! Well then? I'm your only enemy here! Fight me!"
―Albert when he confronts Ken during The Confront

"Gurrgh! This is the end! So it's farewell! Ken Thomas!"
―Albert's final words.

Artwork of Ken and Albert.

Albert's MiG-25PDS "Foxbat E" which he uses in the missions The "GALE", Doll Master, and some Stand By missions up to Phase 6.

Albert's Su-47 Berkut (referred to as "S-37" in these games) which he uses in the missions Tiger's Cave, Wind Valley, Meteor Structure, The Confront, and some Stand By missions up to Phase 10.

Ditto, this time from The Confront, equipped with space boosters.

Ditto, showing that his Su-47 actually lacks the emblem his MiG-25PDS has. 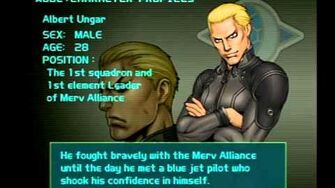 Retrieved from "https://airforce-delta.fandom.com/wiki/Albert_Ungar?oldid=19467"
Community content is available under CC-BY-SA unless otherwise noted.