"Its thick hull and 30mm guns allow this specialty craft to destroy anything on the ground, but it's ineffective in the air."
―Harry's description of this plane in the shop.

The Fairchild Republic A-10 Thunderbolt II (Also nicknamed the Warthog) is an American-made ground attack craft. It was designed entirely around the GAU-8 Avenger rotary cannon, for which it is one of its most well-known features. Its other most well known aspect is the fact that it was nigh indestructible, being able to lose many pieces of its body yet still be flight capable. However, the craft is starting to be retired, owing to two problems; firstly, information on its unique armor properties is lost, making repairing damaged crafts nearly impossible. Secondly, the GAU-8 is now ineffective at dealing with modern armored vehicles. The Avenger is good against soft targets, but so are bombs, and most aircraft don't need to be built around dropping bombs. It has appeared in all three Airforce Delta games, and is usable by Holst Prendre/Pedro Glankert in Strike.

An incredibly unique looking craft. This aircraft has two large turbo-fan engines mounted on the rear, as well as a very odd set of rear-wings. The body itself is very simplistically designed, with its two wings merely jutting out from the craft. And of course, its crown jewel, the GAU-8 Avenger, is mounted underneath of the nose.

It's an alright plane. It's unlocked semi-early, but its low speed gives it a bit of trouble competing with other planes. It does have great mobility and maximum defenses (The highest in the game, predictably), however. Its low speed is just a bit of a bother at times.

A much worse showing than the Airforce Delta incarnation. Stats are medium to low across the board. It's very slow, and it has an incredibly poor 1 range. Sadly, it only has use in Through the Valley of Death. After that, you may as well can the poor Thunderbolt. The range is really the big stickler here.

An interesting incarnation, with stats similar to the Airforce Delta incarnation. The problems stem from poor speed and a lack of missiles, preventing the A-10 from truly shining in air-to-air combat - but in turning and especially gun damage, it truly excels. The amount of damage per bullet appears roughly half of the amount of damage any other plane's missiles would deal, making guns kills a breeze, and the turning is so great that it's possible to act as a turret when fighting ace pilots. Extreme health rounds off its strengths, enabling reckless gameplay with hardly a worry in the world. However, the slow speed is the primary downside; the aircraft is annoying to actually fly, being incredibly slow and having a laughable top speed. Also, when turning the craft, the speed tends to drop very quickly as well, although the craft's above average mobility at lower speeds tends to help counteract this. Overall, it takes a skilled hand to use it well, and some would argue other choices tend to be much more practical.

Note: There are no differences in stats between the US and PAL versions

Enemy A-10 from Nuclear Transport Blockade.

Enemy A-10 from Oil Refinery Seizure. 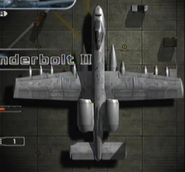 The PAL version of this plane, with an altered paint scheme.

Wallpaper of Through the Valley of Death featuring an A-10 Thunderbolt II.

A-10 with a generic color scheme.

A-10 with Ferrite coating.

Retrieved from "https://airforce-delta.fandom.com/wiki/A-10A_Thunderbolt_II?oldid=18743"
Community content is available under CC-BY-SA unless otherwise noted.